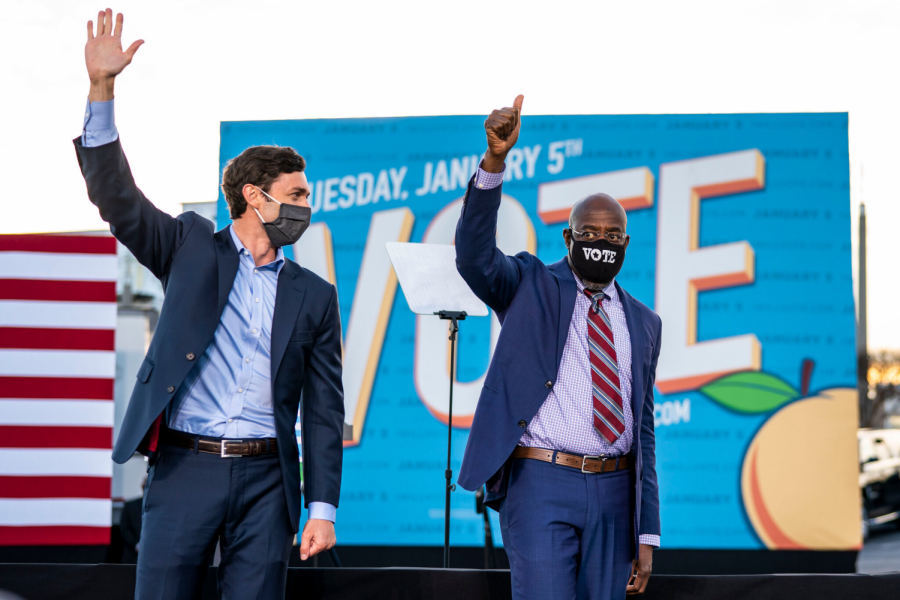 On January 5th, Ossoff and Warnock challenged Perdue and Loeffler for their senate seats. On January 6th, Ossoff and Warnock were declared the projected winners, giving democrats senate majority. This democratic victory comes only two months after Biden became the first blue candidate to secure the state’s vote since 1992. The loss of Georgia seats served a devastating blow to outgoing president Donald Trump who has been claiming election fraud since November. The Democrat majority in both the senate and house allows for president-elect Biden’s progressive agenda to succeed.

Warnock served as a pastor for the church where famous civil rights activist Martin Luther King Jr. once preached. With his win against Loeffler, he will become Georgia’s first black senator. Ossoff’s victory over Perdue will make him the first Jewish senator from Georgia and the youngest member of the senate at 33 years old. Recent polling showed that  African Americans made up 30% of the electorate and of those 30%, 94% supported Ossoff and Warnock. The democratic victory was also credited to younger voters, lower income voters, and new residents of Georgia. The opposite was shown for Loeffler and Perdue. They were supported by white, older, wealthier, and longtime Georgia residents. This poll parallels Biden’s electoral victory in November.

Democratic victory in Georgia marks a new era for the traditional red state. With both the presidential and senate election victory, the Democratic Party has turned Georgia from a red state into a battleground state. Former President Barack Obama congratulated Warnock on his victory and said, “Georgia’s first Black senator will make the (Senate) chamber more reflective of our country as a whole and open the door for a Congress that can forego gridlock for gridlock’s sake to focus instead on the many crises facing our nation.” In his address on Wednesday, Warnock promised to serve all Georgians no matter who they voted for in the senate elections. “The other day, because this is America, the 82 year old hands that used to pick somebody else’s cotton  picked her youngest son to be a United States senator,”he said. “Tonight , we proved with hope, hard work, and the people by our side, anything is possible.”

On Wednesday morning, Loeffler, who remains a senator until election results are finalized, joined a small group of senators scheming to challenge the congress certification of Biden’s victory. Georgia’s runoff election had Ossoff, a former congressional aide and journalist, and Republican incumbent Perdue, a former business executive, on opposing sides. On Wednesday morning, in a social media broadcast, Ossoff said, “This campaign has been about health and jobs and justice for the people of this state – for all the people of this state. Whether you were for me, or against me, I’ll be for you in the U.S. Senate. I will serve all the people of the state.”

President Trump potentially caused the Republican loss with his constant insistence on election fraud and the undermining of key Georgian Republican officials. He compared the republicans in Georgia’s election system to “chickens with their heads cut off”. He re-energized his idea of voter fraud right when votes were meant to be cast, discouraging Republican voters from voting. The majority of legal challenges presented by Trump and his supporters have been dismissed and tossed out of court. Republican Utah senator, Mitt Romney said, “It turns out that telling the voters that the election was rigged is not a great way to turn out your voters.” Numerous election officials, including the Republican governors of Arizona and Georgia in accordance with Trump’s former attorney general William Barr, have confirmed that there is no evidence of voter fraud in the presidential elections. Gabriel Sterling, a top Georgia election official, said there was “no evidence of any irregularities. The biggest thing we’ve seen is from the President’s fertile mind of finding fraud where none exists.”